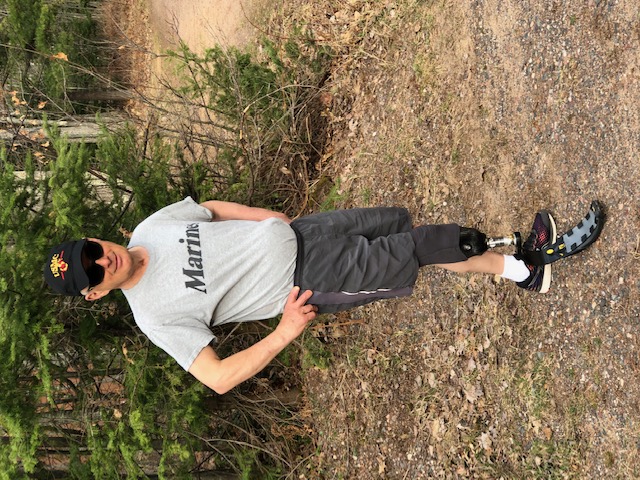 Bernard ''Jake'' Jackovich......From a wooden leg to a running blade!....After surviving ten months of intense combat as a Marine rifleman, I was wounded on Dec.23 1967 by a RPG which severed my right leg below the knee and severely damaged my left hand and wrist...I spent the next 15 months at Philadelphia Naval Hospital recovering from my wounds before returning home to Calumet.....a love for the outdoors has led me to enjoy hunting, fishing, canoeing, mountain biking, skiing and snowshoeing..the activity I missed the most was running.  In high school I lettered in track and could run a 5 minute mile..My love of running was so great that when I saw my leg shattered I didn't say, "damn I'm going to die!"  I said, "damn I'll never run again!!" In the 1990's carbon fiber technology came along and made my dream of running again a reality!  At the age of 65 I was thrilled to get my first run blade! In 2014 I ran my first 5k race in 31 min. taking first place in my age group and also was featured in a Runners World article.  Since  then I have run four consecutive Hancock Canal 5 mile races 2016-19 with a PR of 45.52. at a 9:10 pace....I have logged 2839 miles on my two run blades and will get a new one soon.  I am grateful to everyone who helped me achieve my dream of running again!!